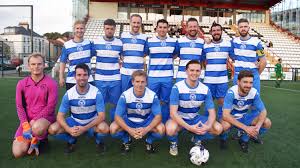 The beginnings of Rozel Rovers Football Club took place in 1943 when Mr Thomas Billot put a field at the disposal of the young men of the Vingtaine of Rozel.

On 3rd September 1944 the club was made formal and it is from this date that the official records begin although it is generally agreed and accepted that the club started in 1943.

The club was founded “to encourage sport for the young men of the Vingtaine of Rozel”. The first General Meeting was held on the proposed pitch in a field kindly lent to the club by Thomas G. Billot of La Ville Bree, the meeting consisted of “20 young men eager to get the club going and to have good sport”.

The club used the pitch at Ville Bree until they moved to Cottage Farm for the 1945/46 season. Their last season at Cottage Farm was the 1958/59 season after which they remained without a pitch until the start of the 1973/74 season when they played their first match at Le Couvent, the pitch at which Rozel Rovers FC still play today.


Jersey Sport is not responsible for the business and activities of clubs and associations listed in this directory.