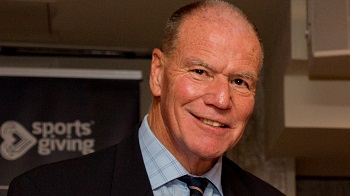 Colin Campbell is the only Jersey athlete to compete in both the Summer and Winter Olympics, something few athletes achieve. Campbell competed in the 1968 and 1972 summer Games, in athletics, in the 400m and 800m. Following a switch to bobsleigh in 1974 he went onto compete in the 1976 winter Olympics in Innsbruck in the four-man bob, becoming the first Brit to appear in both the summer and winter Games.

He achieved qualification for the 1972 Games by breaking the British record in a time of 1m 46.1 seconds. He qualified for the 1974 Commonwealth Games by beating Steve Ovett.

Altogether he represented Great Britain on over 50 occasions including 34 full internationals.

In other sports he was an All-England Junior Badminton finalist in both the singles and mixed events, played badminton for Surrey and also squash for Kent.

After returning to Jersey in 1976 he was invited to become founder President of Jersey Spartan Athletic Club on its formation in 1979 and went on to hold this post for 15 years. He continued to compete as a veteran athlete and in 1991 was a member of the Great Britain M45 4 x 400m relay squad that won the Gold Medal in the World Athletics Championships held in Turku, Finland.

He remains a Life Vice-President and Life Member of both Polytechnic Harriers and Jersey Spartan A.C.

He managed Fort Regent, and helped set up the tennis facilities at Les Ormes.