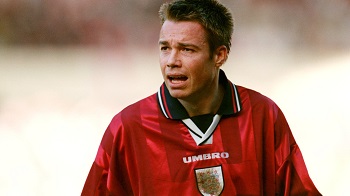 Graeme Le Saux is regarded by many as the greatest footballer to have come from the island.

He began his career in Jersey, featuring in one Muratti at the age of 18 when he helped his island to a 4-3 victory over rivals Guernsey. Locally, Le Saux played for St Paul’s, before joining Chelsea in 1987 and then going on to play for Blackburn Rovers and Southampton either side of a second stint at Stamford Bridge.

He won the Premier League title whilst at Blackburn (1994-95 season). In August 1997 Le Saux returned to Chelsea in a £5 million deal, a club record fee at the time.

His club career saw him score 20 goals in his 403 league appearances. Across all competitions he featured more than 500 times for his English professional sides, announcing his retirement in 2005 as Southampton were relegated.

As an England player he won 36 senior caps between 1994 and 2000, representing the Three Lions at the 1998 World Cup. His one England goal came against Brazil (see video below).