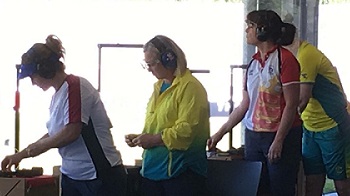 
Jersey’s shooters were amongst those in action on a busy Tuesday at the Commonwealth Games in Gold Coast.

After day two of the Queen’s Pairs Finals, the Jersey duo of David Le Quesne and Barry Le Cheminant took 10th spot with a total of 572-36v.

Former Jersey Sport officer Nikki Holmes (pictured) claimed 9th in the 25m pistol qual. precision, but could not repeat that form in the rapid section as she finished 13th overall.

Meanwhile, in the 50m rifle prone qualification event, youngster Cameron Pirouet shot 605.8 to end up in 16th spot while teammate Andrew Chapman was 22nd in the same event.

On the track Elliott Dorey made his Commonwealth Games debut, registering a 800m season’s best of 1:52.60 for 8th place in his heat. Sam Dawkins was back on the track later in the day with a personal best time of 21.91 seconds in the 200m heats.

It was the final day of action in the pool for Jersey’s swimmers, who completed a remarkable week with Gemma Atherley’s 4:22.55 in the 400m freestyle enough to ensure personal bests were set in all the events in which she, and Harry Shalamon, swam in Gold Coast.

In the cycling time-trial Dan Halksworth made history as the first man to compete in three different sports at three different Commonwealth Games, adding the bike to his triathlon and swimming appearances in years gone by. He ended up in 26th place, while team mate Jack Rebours was half a minute quicker in 23rd.

Kim Ashton, who won six golds at the 2015 Island Games, came 15th in the time-trial, with Helen Ralston three places further back.

Jersey’s badminton players entered the fray for the first time at these Games, with Alex Hutchings and Emily Temple-Redshaw both losing their Round of 64 matches 2-0. Earlier Temple-Redshaw had teamed up with Matthew Bignall in the mixed doubles, suffering a 21-13,  21-13 loss against Singapore.

In the lawn bowls, Malcolm de Sousa continued his good start with a  21-8 victory over the Isle of Man’s Kenneth McGreal, but later lost narrowly 21-20 to Canada’s Ryan Bester. The women’s pairs team of Rachel MacDonald and Chrissie Grimes suffered a 22-12 defeat to India and 22-14 loss against Wales, before the triples team of Doreen Moon, Eileen Vowden and Joan Renouf overcame Namibia 15-12 in their group match.