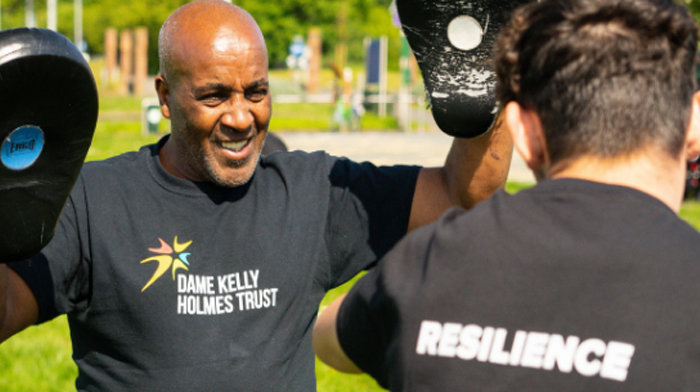 
The Power of Sport is something that is widely recognised, and Jersey Sport is delighted to be partnering with the Dame Kelly Holmes Trust to deliver their successful programmes – a range of pathways for young people.

The Trust are a UK youth sports charity which supports 11-25 year-olds who are harder to engage in both education and in the community. They train and develop world-class athletes to deliver personal, social and emotional development programmes for young people facing life challenges. Through transformational mentoring, young people’s confidence, resilience and self-esteem increases, which enables them to move into employment, become leaders within their communities, achieve in education and to improve their wellbeing through sport and physical activity.

Amy Williams was a track athlete who took the opportunity in 2002 to try-out the newly-installed bobsleigh and skeleton push-start training facility at Bath University. Hooked on the sport, she became a full-time skeleton athlete and won the silver medal in the 2009 World Championships. In 2010 she realised her dream and won Olympic Gold at the Vancouver Games, Britain’s only gold medal of the Games and the first Winter Olympic Gold in an individual event by a woman in 58 years. Subsequently she was awarded the MBE in the Queen’s Birthday Honours of 2010, and was short-listed for the 2010 BBC Sports Personality of the Year.

Since retiring from the sport in 2012 Amy has had a successful post athletics career including such diverse roles as a motivational speaker and television presenter, in 2018 she was part of the BBC team providing coverage at the Winter Olympics. In 2019 she took up her latest role, as Ambassador for Dame Kelly Holmes Trust, helping to further raise the profile of the charity’s work and support the launch of partnerships in new locations.

Speaking about her upcoming visit to Jersey Amy said, “As Ambassador for the Dame Kelly Holmes Trust, I’m really excited to be launching our partnership with Jersey Sport to bring our world class athlete led mentoring programmes to Jersey. The Trust have worked with thousands of young people over the last eleven years, helping them to gain the confidence, resilience and self-esteem needed to lead a positive life. As an elite athlete myself, I know the impact athletes can have on young people through programmes such as On Track to Achieve and I can’t wait to see how this partnership in Jersey develops over the months and years ahead.”

Jersey Sport is initially hoping to fund two pilots in Jersey focusing on young people who struggle in school and giving them the opportunity through participation on the programme the skills, experiences and mentoring that will help them to build resilience, self-esteem and grow their confidence. They would progress through the On Track to Achieve programme and the Sport Leaders Award. As part of these programmes they have to organise and run a community sport or physical activity event.

Tickets for the RaceNation 2019 Sport and Move More Jersey Awards will go on sale on 19 September 2019.