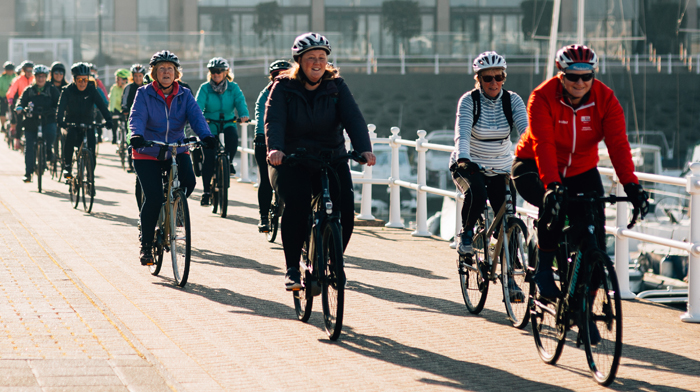 
Catriona McAllister has been named as one of Cycling UK’s 100 Women in Cycling for launching and running a women only cycling programme, HSBC Breeze Jersey, for women in the island.

The women have all been recognised in celebration of the amazing work they have done to inspire other women to cycle as part of Cycling Women’s Festival of Cycling which runs through July.

It also includes less well-known names of women who have been working tirelessly at grassroots level to encourage more women to ride, people like Emma Pajarillaga, who only returned to cycling two-and-a-half years ago.

Catriona, CEO of Jersey Sport, is passionate about getting people active. Originally from Scotland, she has been living in Jersey for the last two years and at the start of 2019 she launched the HSBC UK Breeze cycling programme in the island, under the name of HSBC Breeze Jersey.

It’s estimated that only a million women in the UK cycle regularly – just 3% of the population, with many more bike journeys made by men than women.

A recent poll carried out by YouGov on behalf of Cycling UK that found that 36%* of women said they would be inspired to cycle more with the encouragement of friends and family.

Helen Cook, Head of Engagement, said: “Congratulations to Catriona for making it onto our 100 Women in Cycling for 2019. It’s an incredible achievement and testimony to the tireless work she’s done to raise the profile of women’s cycling.

“Every woman on our list is an incredible ambassador for women’s cycling, but sadly women remain underrepresented when it comes to everyday cycling.

“The gauntlet we’re throwing down is for every woman who already cycles regularly to find just one more woman they can help and inspire to get on their bike.”

HSBC Breeze Jersey was created to help and inspire more women to get into cycling. The group offers weekly social cycle rides for beginners through to intermediate and more advanced riders. The cycling group is just one way islanders are being encouraged to be more active and to think about active travel. Jersey Sport’s Move More Jersey initiative, which launched in May, aims to tackle the issue of inactivity within the island. A staggering 48% of adults and 81% of children in the Jersey do not meet the World Health Organisation’s recommended guidelines for physical activity. The creation of new programmes and initiatives such as HSBC Breeze Jersey and Move More Jersey are paramount to help get the island’s population more active.

To see a full list of nominees for Cycling UK’s 100 Women in Cycling, visit: www.cyclinguk.org/womens-festival-cycling