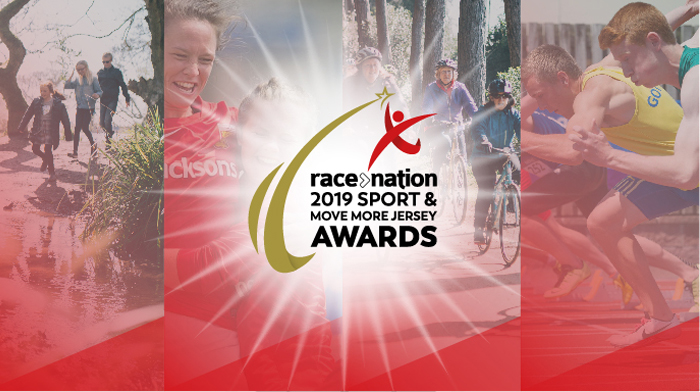 
The nominees shortlisted for each category of the RaceNation 2019 Sport and Move More Jersey Awards have been announced.

This year, ten Awards will be presented at the gala dinner held at Radisson Blu Waterfront Hotel on Friday 18 October, and two sporting stars will be inducted into the Jersey Sport Hall of Fame, sponsored by Ocorian. The winner of the Lifetime Achievement Award, presented to someone who has dedicated a significant amount of time to sport or active living, will also be announced at the black-tie event.

Catriona McAllister, CEO at Jersey Sport said, “It’s been a very successful sporting year for the island, with Team Jersey topping the table at the Island Games in Gibraltar and our very own Serena Guthrie Captaining England at the Netball World Cup. During the evening, we’ll be celebrating the year’s sporting highlights and we’re delighted Amy Williams MBE, Olympic Gold medalist and Ambassador for the Dame Kelly Homes Trust, will be joining us, to speak about her work and our new partnership with the Trust.”

The nominees shortlisted for the RaceNation 2019 Sport and Move More Jersey Awards are as follows:

Accuro Sporting Performance of the Year
Presented for an outstanding performance or series of performances from an individual or team. The nominees are:
• Cameron Pirouet
• Serena Guthrie
• Harry Shalamon
• Stuart Parker


The Aztec Group Sporting Performance of the Year (Under 21)
Presented for an outstanding performance or series of performances from an individual or team, aged under 21 years old. The nominees are:
• Tom Deffains
• Isaac Dodds
• Cameron Pirouet
• Charlotte Neale
• Grace Greenwood

Ocorian Sports Organisation of the Year
Presented to a club, association or sporting body which has demonstrated a commitment to good governance, and excelled in all, one or more of the following areas: Grassroots Sport, Club Sport, Performance Sport. The nominees are:
• Gracie Barra Jersey
• Jersey Tri Club
• Jersey GAA Sports Club
• Jersey Hockey

C.I. Engravers Manager or Coach of the Year
Presented to a manager or coach who has demonstrated all, one or more of the following attributes:
Is a good role model, develops players, operates within the spirit of sport and encourages others to do the same through good sportsmanship, has the respect of players and officials, has strong communication and leadership skills, has shown a commitment towards improving their sport, has made a significant contribution to an outstanding performance or series of performances. The nominees are:
• Andrew Hamon
• Nathan Jegou
• Neil MacRae
• Lucy Even

Randalls Volunteer of the Year
Presented to a non-coaching or non-managing volunteer for an outstanding contribution to sport or active living. The nominees are:
• Bob McGinnigle
• Walking for Health Volunteers
• Peter Flambard
• Paul Gartshore

Rathbones Young Volunteer of the Year (Under 25)
Presented to a young volunteer, under 25 years old, for an outstanding contribution to sport or active living. The nominees are:
• Charlotte Samson
• Abbie Thompson
• Elliot Powell
• Liam De Sousa

C.I. Travel Group Move More School of the Year
Presented to a Jersey school (primary or secondary) for an outstanding example of encouraging participation in sport or physical activity within the school. The nominees are:
• Plat Douet School
• Mont a L’Abbe School
• Rouge Boullion School
• Victoria College Preparatory School

Move More Workplace of the Year
Presented to a Jersey workplace for an outstanding example of encouraging participation in sport or physical activity within the workplace. The nominees are:
• Fairway Group
• Mourant
• Intensive Care Unit
• Accuro Fiduciary

Move More Group of the Year
Presented to a group, organisation or movement which has brilliantly inspired or promoted active living. The nominees are:
• HSBC Breeze Jersey
• @jersey.runclub
• Jersey Rouleurs
• Jersey Round Island Challenge

Sporting stars, Ted Ray and Cliff Mallett, who have demonstrated an outstanding contribution to island sport will be inducted into the Jersey Sport Hall of Fame, sponsored by Ocorian.

Tickets for the awards evening are now on sale. Join us for the awards with guest speaker Amy Williams MBE, including drinks reception on arrival, two course dinner with petits fours and coffee, followed by evening entertainment. To book your tickets, visit: www.jerseysport.je/awards-2019