News
Around 1,000 people back #VoteForSport campaign ahead of polling day 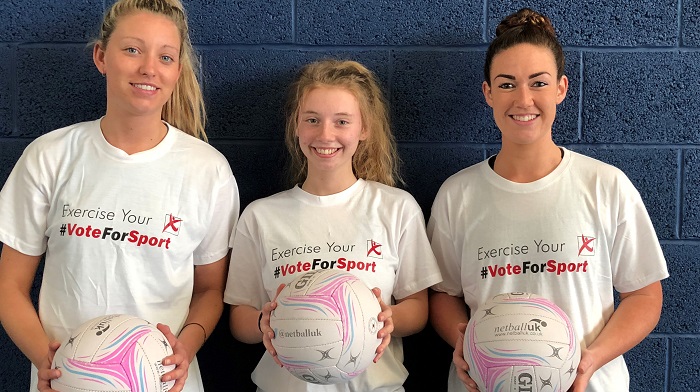 
Around 1,000 people have helped ensure sport and active living has been a high-profile election issue by backing the #VoteForSport campaign in the build-up to polling day in Jersey.

At the last count around 900 people had signed their names on the Jersey Sport website, while dozens more have donned #VoteForSport T-Shirts. Jersey and England netball star Serena Guthrie added her support by recording an online video.

In addition, more than 40 candidates showed their support, either by officially pledging to advocate for sport and active living by signing the “pledge board”, or by leaving messages on the Jersey Sport website.

“We’ve been overwhelmed, not just by the number of islanders signing their name but also by the real quality and thoughtfulness of the messages,” said Jersey Sport CEO Catriona McAllister.

“In an island where, traditionally, there isn’t a large voter turn-out, we’re delighted to have got this level of engagement and backing for the campaign.

“Sport and active living has definitely been an election issue, and we’ve tried to make sure islanders realise this isn’t just about top-level competitive sport but about creating a healthy Jersey. We’ll certainly be reminding the successfully-elected politicians of the need to invest in the area to ensure we have a thriving, healthy population.”

Polling day in the Jersey Election is Wednesday 16th May. Islanders can continue to add their name and message for the candidates by going to jerseysport.je/voteforsport.

“We’ve very much fulfilled our remit with this campaign, making sure the aspiring politicians understand the vast importance of sport and active living to island life,” added Jersey Sport chairman Phil Austin.

“Clearly it’s on the political agenda, now we hope the new assembly will be bold in their decisions around facilities, health services and importantly commit to investment.”